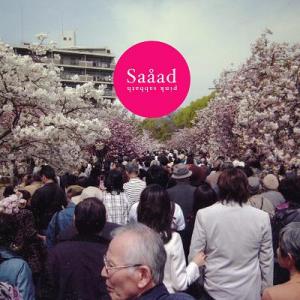 Today I bring to your attention a brutally atmospheric and esoteric self-released album “Pink Sabbath”, which appears to be the creation of Saåad, a mysterious and newest (for me) project, run by Romain Barbot. As I can understand from the sounding of this work, it is represented by processed sounds of Tibetan ritual instruments – huge horns and maybe some other. The opening track, “Pink Sabbath” is introducing you to the Saåad’s sacrament of vibrations, ringing and brain-exploding massive drones. The sonic contours are blurred and obscured, as if located in the far away distance, but through the flooding light of it you distinguish different elements. The tracks are smoothly passing one into another, so the whole album may be considered as a single track, though having various parts and moods. For me the most striking theme is the last, called “Southberry Tower”, with its majestic and strong radiance, which as if reveals the power of the Himalayas, where the mythic (or not mythic, who knows?) land of Shambala is situated. The music is rather energetic and purifying – you can feel some kind of takeoff, detachment from the physic level, rushing into the roasting depths of Light. So, join the “Pink Sabbath” of Saåad.

This entry was posted in Uncategorized and tagged ambient, drone, Saåad, self-release. Bookmark the permalink.