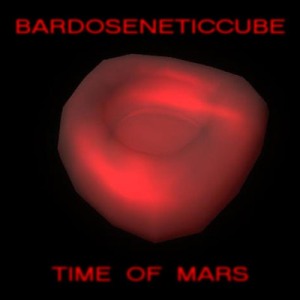 Bardoseneticcube is a dark ambient project from Saint Petersburg, which nowadays ceased its work, but in spite of it, musicians continue their activity in other projects and collaborations. Today’s target of my reviewing is their album “Time Of Mars”. It begins with strident high sounds, that adjust a listener to some dark kind of mood. All tracks are untitled, however, they are rather expressive. You can feel a little bit prostrated and lost in a spacious cavern of subconsciousness. You are surrounded by unknown echoes, that attack you from every quarter. These sounds are aggressive, that could be the reflection of a possible conception of the album: Mars is a god of war, and now his time has come. Bardoseneticcube’s work is full of this brutal vibration, that strikes through all of your mind and body. Another feature, that is evident, is wide spectrum of all kinds of sounds – from resembling screams – to resembling bursts. You can hear harsh noises, sharp sqeakings and buzzing; all of them are synthetically made, but they successfully reveal the main idea – the time of Mars and everything, that accompanies this terrible phenomenon. I must specify, that this idea of the album’s conception is just my point of view, and it can differ from the authors’ creative intentions. It is obvious, that Bardoseneticcube’s album is an important contribution into the field of experimental music, and I recommend you to make the acquaintance of this work.

One response to “Bardoseneticcube – Time Of Mars”