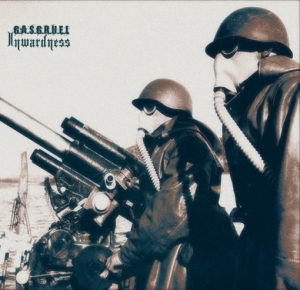 Total destruction. Ubiquitous death. Apocalypse here and now. Gasgruel’s music makes us aware of the danger of our dark sides. His work “Inwardness” gives a picturesque view of war and its horrors. There is not so much information in the Internet about the author, which hides behind the pseudonym Gasgruel, but it is known, that he comes from Kaliningrad, and the project was founded in 2005. Album “Inwardness” is released on Liminal Recs label. The first thing, that bursts upon the eye is the stratified and rather complicated texture of the sonic narration – sounds of shooting weapon, suffering people, damped conversations, explosions, much noise are mixed into a terrible sense attack, creating a picture of a bloody battle – a result of allowance of human stupidity development, which may certainly be its inwardness. All this seems to be the musical embodiment of Erich Maria Remarque’s “All Quiet on the Western Front” and other of his novels, which through naturalism try to awaken people’s mind and to show, that wars occur like an avalanche – from an insignificant snowball to a shattering great mass. From greed and wish of power to killing. In one of Gasgruel’s interviews, he says, that gold is dust. Furthermore, he adds, that we shouldn’t live for earning money, because we don’t have so much time for wasting it on such trifles. I completely agree with him and support the idea of his album “Inwardness”. Almost 40 minutes of death, fire and tortures reveal the self-annihilation potential of our modern world. Almost 40 minutes, that must make us become deep in thoughts.